January 27, 2012
Mrs Beeton describes the kitchen in the following way:
"It must be remembered that it is the great laboratory of every household, and that much of the "weal or woe" as far as regards bodily health, depends upon the nature of the preparations concocted within its walls".
I have been experimenting in my great laboratory . . . making whiskey marmalade jam. Now, I do not like marmalade jam . . . never have, never will.  However my DH and son love it . . . so this jam was made completely with love.
I used 4 large oranges and 2 medium lemons. All peeled and cut up (chunky style), placed in a large saucepan with 6 cups of water. Cooked for 1 hour until the peel was soft.
After 1 hour, measure the fruit mixture, allowing 1 cup of sugar (1/2 dark brown & 1/2 white) per cup of fruit mixture.  Return fruit mixture, treacle (2 tablespoons) and sugar to the heat - stir until sugar dissolves. Bring to the boil, uncovered, without stirring for about 40 minutes or until marmalade jells when tested. Mine took 50 mins. Stir in 2 tablespoons of whiskey (this can be omitted if you don't like the taste).
Pour hot marmalade into hot sterilised jars; seal immediately. This recipe is from the Australian Women's Weekly Preserves cookbook, which I picked up from the newsagency (mine has a different cover). 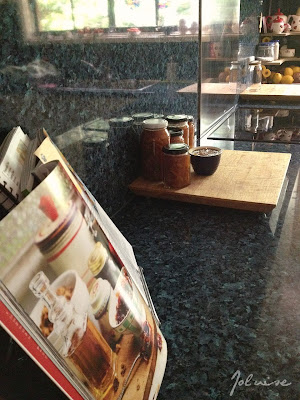 Dear husband has just tried some and it has passed the test . . . he ate 4 teaspoons and said it was "very good".  He will keep four jars and our son will have one.  The flavour will improve over time.
around the house Kitchens