Artist: Ruth Sanderson
Born 1951 - Massachusetts, USA
Children's and young adult illustrator
From Ruth's website: "I have always enjoyed a challenge and decided to teach myself oil painting when I was around 13 years old. The first thing I painted was a horse head, shown here on the left. I took art lessons from a woman in town, but she said I had natural talent and she really could not teach me anything more."
"For my Senior Art History project I copied a Manet painting, The Bar at The Folies-Bergeres in its original size- almost five feet wide. I decided I wanted to make a career out of art and after spending a year at a liberal arts college I transferred to an art school so I could take a combination of traditional drawing and painting courses and commercial courses as well. I really wanted to make a living and decided that illustration was the way to go. The fine art scene was also more abstract and did not appeal to me, though I admired older painters like Magrite, The English Pre-Raphaelites and the Hudson River School. The illustrators whom I admired the most were the Howard Pyle, N.C. Wyeth, Norman Rockwell and Mark English."

"In 1974 I graduated from the Paier School of Art  in Connecticut. An agent in the children’s field took me on and though I did a little magazine and advertising work on my own I soon was busy with children’s illustrations, mainly textbooks, for the first five years. I started to do some full-color covers as well. The books I had read as a child, the Black Stallion series and the Nancy Drew series were being put into paperback for the first time and I was fortunate to get the assignment for 18 covers in each series. I did some black and white picture books and an edition of The Little Engine that Could."
"My latest illustration project is a version of Mother Goose with around 70 illustrations. It took me three years to paint! Jane Yolen posed as Mother Goose and is flying high on the cover. The pub date is March of 2008. I am now working with the editor, Andrea Spooner at Little, Brown on a retelling of Goldilocks and the Three Bears for 2009."
The first paintings I have included are from her children's books, many from the Mother Goose collection - it isn't hard to tell which nursey rhymns.  The later ones are for young adults and I think some of these are just lovely with a Pre-Raphaelites feel to them. Recently I have done other illustrators, and this would have to be one of my favourites. 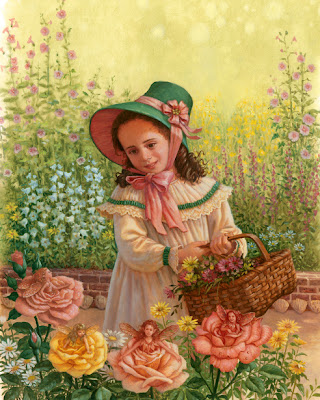 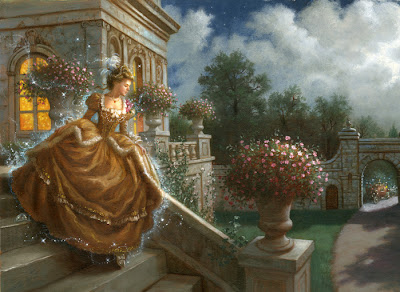 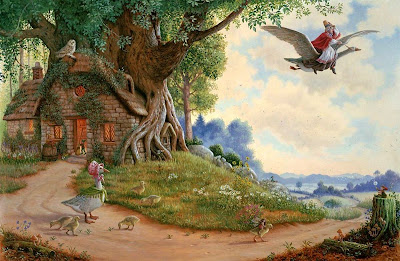 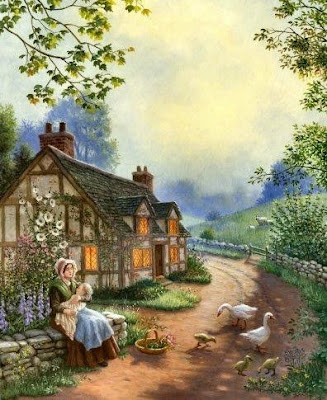