A Train in Winter by Caroline Moorehead (link)
Most books about WWII and Auschwitz are tough reads, this one is no different. I read this during my lunch hour and sometimes the hour would pass and I would hardly notice that I had been reading for 60 mins - I just couldn't leave these women and return to my work. This book is compelling.
I often wonder why we read such tragic stories of suffering and horror - is it so we don't forget or we are simply fascinated by what happens to others from the comfort of our homes.  I can't help but think "What would I do", if placed in the same situation.  This is a question I never want to find out.
In January 1943, a group of 230 French women were rounded up and sent to Aushwitz in Silesia (now in Poland) only to be released at the end of the war. The youngest was 15, the eldest was 68. Only a handful were Jewish.  These were French resistance fighters trying to defend their country from Nazi occupation. Only 49 returned home, all suffered ill health for the rest of their lives.  This is their story and one that is so sad, so horrible but so full of friendship.  These women held onto each other, supported and cared for one another, worked together in their attempt to survive.  Of the 181 who did not return home, they died from typhus, brutality, starvation, gassing or simply gave up the fight. No one over 44 survived. This is a story worth reading but it does take a bit of courage to read.
It was an excellent read.
Rating: ★★★★★ 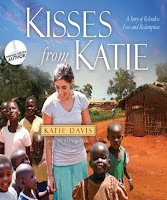 Kisses for Katie by Katie Davis with Beth Clark (link)


This is another book of human suffering.  Katie Davis, a very young Christian missionary from the US goes to Uganda and witness first hand the poverty and appalling conditions of the Ugandan people, in particular the children. However she is determine to make a differences. It is uplifting and inspirational.  Whilst I needed courage to read "A Train in Winter", I can't imagine how much courage Katie has needed to do all that she has in Uganda, mostly by herself at the tender age of 21.  Katie, however, would probably say that none of what she has achieved, she has done alone, the Lord has always been her leader and she has simply followed.
Katie runs Amazima ministries through which she educates hundreds of children and presently feeds over 1 600 per day. She has adopted 14 orphan girls, this in its self is incredible.  Her love for the Lord and her desire to share it with everyone comes through clearly in this book.  Her faith is amazing for such a young woman.
Many who have read this book (check out the comments on Amazon) say that it was "life-changing", I won't go that far - however, it is encouraging, inspiring and a very interesting read.  I would highly recommend it to others and I will give it five stars.
This is Katie's blog and worth a visit: link
Rating: ★★★★★