February 21, 2012
The occasional thunderstorm is quite enjoyable, every night is just a pain. Summer at my place is meant to be hot and dry.  Summer this year is grey (overcast), cool, slightly humid and wet (it's raining as I write).  I feel like I am living in the tropics!  On Saturday night we had an impressive thunderstorm followed by an even more impressive hailstorm.  My son and I stood on the front porch and watch the amazing show (no photos sadly), at one point it was raining leaves as they were being shredded from the Gum Trees. My poor zucchini and pumpkin plants look worse the wear now and aren't likely to recover.
The major problem with thunderstorms is our dog (Gaia). The moment he hears the noise he barks.  He will stand in the pouring rain and bark.  He will run about wagging his tail and bark.  And he will bark non stop until the thunder has past us.We can't quite work out why he barks as he doesn't appear to be scared - we think he is "telling it off"!!  In sympathy for the neigbours, we bring Gaia inside and shut him in the bathroom where he generally barks less - a safe warm place to be. However we have noticed he will bark at the smallest amount of thunder or when it starts to rain as it appears he likes these indoor trips. I feel that we are being conned by a dog.
The other problem with thunderstorms is that I can't use the computer. DH doesn't like them plugged in or the internet on during storms, so my computer usage has been interuppted of late. So my apologies if I haven't visited your blog as much as usual, I only have a short time on the computer before the nightly thunder arrives. 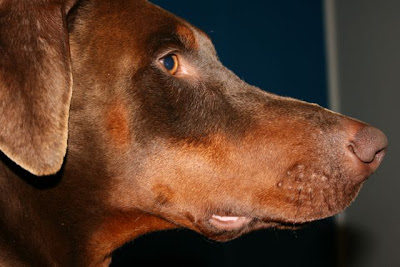 PS it has just started to rain and the dog has started to bark (in the rain), no thunder anywhere near us tonight - but nevertheless, Gaia is now in the bathroom - warm and cosy!!  He is happy:)