For many years it was almost impossible to go to the toilet/bathroom alone, then the children grew up . . .  toilet visits were once again a place of quiet and peaceful reflection.

Then I got a cat. (I will get back to the cat shortly)

One of the first lessons I learnt when I became a mum, was the need for my son to follow me everywhere, and that included the bathroom.  After a while it became the norm and I quite like those chats we had.  This continued for years. When my youngest son was in his early teens, he would sit outside the toilet door and continue his conversation as if I was cooking in the kitchen.  I had to be careful when walking out of the bathroom in case I tripped over him.  My sons are now all grown up . . . they no longer sit outside the toilet door and chat.   However, only a few days ago I received a phone call from my eldest son (now 24) and we chatted away about the meal he was cooking and mid way through I had to go to the toilet.  My son couldn't understand why I couldn't/wouldn't continue the phone call whilst on the loo!!  I explained (in some hurry) that I didn't want to drop the phone!! 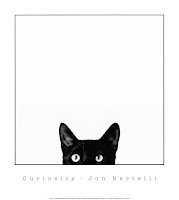 Now that I have the toilet to myself, I go quietly and sometimes I shut the door.  But before long, I can hear a tapping, then a push, and the door springs open . . . sometimes almost hitting my knees.  Ruby (the cat) has arrived. She likes to visit and sit on top of the bin.  Sometimes she likes it when I roll up some toilet paper and throw it at her.  And she doesn't like the door shut.

On other occasions my DH would also like to have a conversation and he too, stands outside the door and talks.

To be honest, unless you are single and animal free, women don't get much of a chance of going to the toilet in peace. Unless it is late at night and the family are asleep, but even then Ruby is willing to get up and say hi.

around the house cats Children