Artist: Thomas Kinkade
1958 - 2012
Painter of lights
Thomas Kinkade died last week at the age of 54.  I think everyone would recognise his artwork (he was a prolific painter with over 1000 works) as he art appears on so many things these days, from calendars to books, puzzles to biscuit tins to prints.  Now, please don't shot me, but he isn't my most favourite artist because he work is all very similar. It is pretty, cosy and feminine and whilst I like pretty and feminine, I like it in moderation and unfortunately Kinkade did it in bucket loads.  He certainly was a talented artist but I wish he had a little more variation in his works - it can be hard to distinguish one painting with another. Personally I prefer more boldness and movement in art and Kinkade is not a painter I would have on my walls for that very reason. But, art is personal, and what I don't like, others love . . . and that is fine. We all have different tastes, it is what makes the world go round.

A key feature of Thomas Kinkade's paintings are their glowing highlights and pastel colours. His works often portray pleasant aspects of the countryside, idyllic settings such as gardens, streams, stone cottages, lighthouses and pretty main streets. His hometown of Placerville (where his works are omnipresent) is the inspiration of many of his street and snow scenes. Many critics have called his art "chocolate box art" - art without substances and criticised Kinkade for his commercial enthusiasm in selling prints. 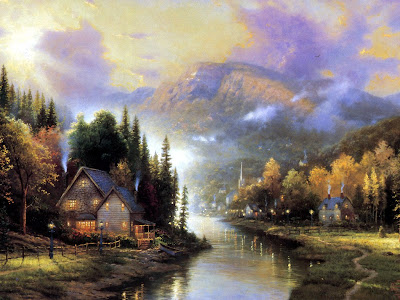 I doubt Kinkade worried to much about the critics, his works sold like hotcakes and became a commercial success.  Kinkade was a Christian man and he said he gained his inspiration from his religious beliefs and that his work was intended to contain a larger moral dimension. He has also said that his goal as an artist was to touch people of all faiths, to bring peace and joy into their lives through the images he creates. Many pictures contain specific chapter-and-verse allusions to certain Bible passages. 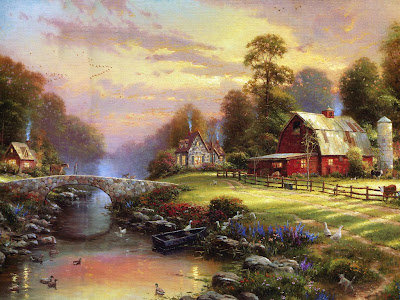 Every painting by Kinkade has the letter "N" painted in it, sometimes as a monogram, but sometimes just merely hidden. The "N" is a tribute to his wife, Nanette. Many paintings also include the names and images of his children. 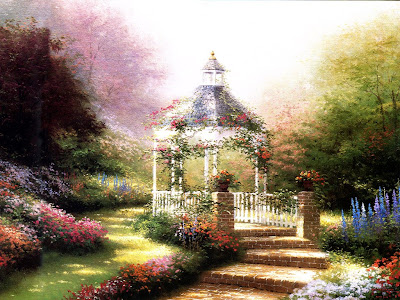 Kinkade did paint scenes other than cottages and some of these are really nice, in particular the three below (and the one above), they have far more life and character with vibrant colours - they are urban and contain people (unlike his country scenes).

Kinkade was asked to create paintings to commemorate Disneyland's 50th Anniversary and Walt Disney World Resort's 35th Anniversary - I think you can guess who this one is representing? 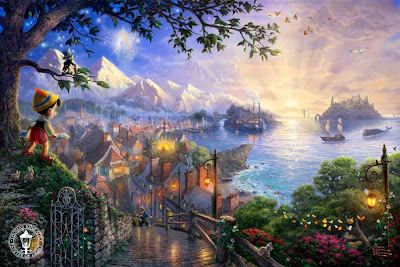 From news reports, it has been reported that Kinkade had been battling alcoholism for years and apparently suffered a relapse just prior to his unexpected death. It this was the case, it was a very sad end to such a famous painter. Sadly, he isn't the first painter to drink to much leading to an early death.
PS: He named his four daughters after famous artists: Merritt, Chandler, Winsor and Everett and each daughter had the middle name "Christian".