May 09, 2012
Note: Art Wednesday has now been moved to Fridays - generally a quiet day of my blog. Do come and visit and leave a comment :) 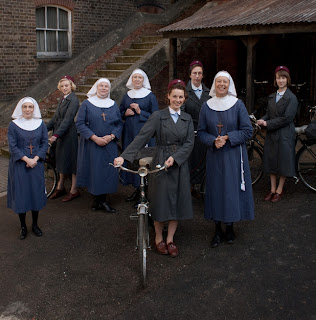 It is hard sometimes to know if other people will like the DVDs that I like - things that I might enjoy maybe be disliked by others, or perhaps offensive. As a result I am always in two minds about recommending films to others. I try and find ones that are uplifting, interesting and I hope encouraging, they aren't always Christian though.  So I do hope you like this one as much as I did.

I have just finished watching "Call the Midwife", based on the book of the same name by Jennifer Worth.  Nurse Jennifer Worth (nee Lee) was a midwife in the East End of London in the 1950s.  This was a time of poverty, unemployment, high birthrates plus the early introduction of birth control. Nurse Lee worked at Nonnatus House, a convent in one of the poorest areas of London and saw it all - far more than she had bargained for.

The TV series (6 parts with 8 more being made this year) tells her story, plus those of the women (nuns and nurses) who she worked with. This is an adult TV series as it shows women giving birth and situations that perhaps might offend e.g. prostitution.  In saying this, it is very tastefully done and not trashy in any way.  The stories revolve around the women, the mothers and their struggles and how Nurse Lee is confronted with reality that she never knew existed. 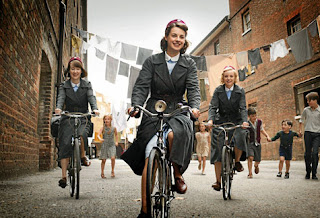 What impressed me most about this TV series is the portrayal of the nuns. Often nuns (in film) during this era are portrayed as ruthless people who didn't care, however the nuns of Nonnatus House were trained midwives and are portrayal as caring kind women who would do anything to help their community.  All the characters are so likable and by the end I wished I knew them all personally!

This may not be every ones cup of tea - but it is thought provoking and touching. The music (often the singing of the nuns) is beautiful and the costumes the girls wear when not in their nurses uniforms are 1950s and so pretty (feminine). I would recommend to anyone interested in midwifery during this period. Do check out the clip. Interestingly, this has been very popular in the UK with more viewers that Downton Abby.