Henry John Yeend King was an important Victorian genre and landscape artist. He was born in London on August 21, 1855 and began his education as a choirboy at the Temple Church. One of the artist's earliest recollections was of being locked in the building one afternoon after practice: "I had to spend the night in a cabin built of pew cushions, while my father was inquiring at every hospital in London. After three weeks' rest with a bad cold, on going back to my choral duties I was summoned to an interview with a Bencher, who, after regaling me with cake and wine, presented me with five shillings for having been a 'good boy,' and 'for not having thrown my boots through one of the stained-glass windows.' The idea of doing such a thing had never occurred to me."
His specialty was scenes of rustic genre and the countryside - almost never showing the heavily industrialized cities. His paintings depict pretty farm girls (often using his own daughter as a model) at work in the fields or on the farm - much like the French Realist artist Julien Dupré; or women at rest in tranquil landscapes or cottage gardens.
In 1881 he married Edith Lilian Atkinson and they had one daughter - Lilian (who became an artist).  In appearance Yeend King was a contrast to the conventional idea of an artist, being clean-shaven, wearing his hair short, and having a genial smile and a great fund of humor. Like most painters, however, he was a real Bohemian, with a wonderful collection of funny stories, which he told well. He was seldom without a snuff-box, although he himself was not a constant snuff-taker.
In 1879, he was elected to the Royal Society of British Artist (RBA) and in 1886 he was elected to the Royal Institute of Painters in Watercolor (of which he later became vice-president). He was also a member of the Royal Institute of Painters in Oil-Colors and was a frequent exhibitor at all the major exhibition halls; showing 115 works at the RBA, 38 at the RI and 94 at the Royal Academy. Yeend King also exhibited paintings throughout Europe and the United States - winning medals in Paris, Berlin and Chicago.
He died on June 10, 1924 at the age of 68. (source) 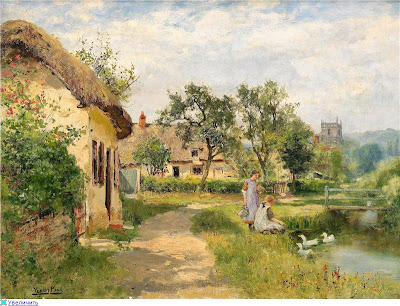 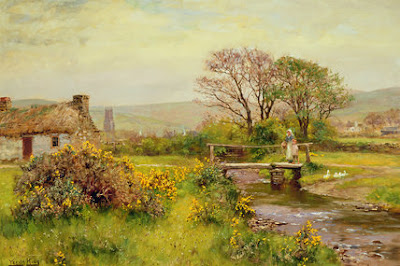