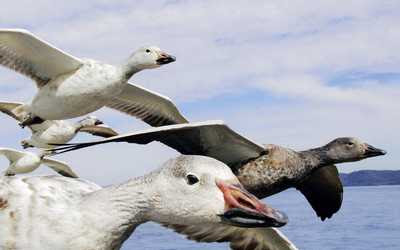 I have watched many nature documentaries, but Earthflight would have to be one of the best (my son certainly thinks so). It is excellent to say the least - so good it deserves an Oscar.  What makes this series (6 - 1 hour episodes) so spectacular is the filming . . . it has been so cleverly shot that the viewer sees the world through the eyes of the birds . . . for once we get the birds eye view of the planet.  However to make it even more special it doesn't just focus on the birds, the series also shares with us the animals that the birds interact with or pass over on their migration journey - the wonderful dancing string rays (have a look at the clip at the bottom of this story - magical), the lions and polar bears, the wildebeest, the great white sharks. The last episode reveals how it was filmed, it is so clever. 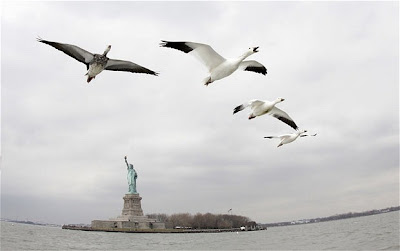 Each episode covers a different part of the world: North America, Africa, Europe, South America, Asia and Australia. The main focus is on the amazing migration of birds and all the struggles they face on their long journey across the planet.  The interaction between the birds, mates for life, the care of their offspring, how they don't get lost (generally) and loads more. . .  this is more than the usual bird documentary. I finished watching it was a completely different respect for these creatures. This is something I would certainly use for homeschooling if my children were children!

Narration is by David Tennant (some may know him from Dr Who) with his lovely Scottish accent making the listening of his voice very easy on the ears. Made by the BBC.

I couldn't help but think of the following verses in Genesis (1:20-21) And God said, "Let the waters abound with an abundance of living creatures, and let birds fly above the earth across the face of the firmament of the heavens."  when I was watching this series. These amazing creatures were all created by God and whilst we marvel at their ability, we shouldn't really, God does amazing things all the time. So God crated great sea creatures and every living thing that moves, with which the waters abounded, according to their kind, and every winged bird according to its kind. And God saw that it was good.