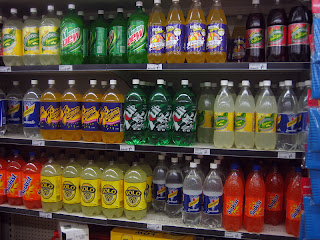 Do we need to ban certain food because people do not know how to consume in moderation?

When I was a child we had fizzy drinks and lollies on special occasions -- Christmas and birthdays were two of those occasions.  Now everyone consumers fizzy drinks all the time, quite often in large quantities. An entire aisle at my local supermarket is dedicated to fizzy drinks and chips (another aisle is dedicated to lollies and a third aisle to alcohol) -- it shows how much we buy. I work with a man (yes, a health fanatic) who drinks bottles of diet coke every day (2-4 litres per day .500/1 gallon) and sees nothing wrong with it.

It appears, considering the obesity epidemic we are currently witnessing, that people cannot eat or drink in moderation.  On top of all the fizzy drinks (that contain no goodness at all), we eat far too much take-aways, lollies, chips and alcohol. All empty calories that pack on weight, ruin our teeth, increase blood pressure, result in Type 2 diabetes and can lead to reproductive problems for women.

But do we need governments to ban 'bad" foods because we cannot control our intake. Or perhaps increases taxes on "bad foods"?  I'm inclined to say "no" as I think we have so many regulations these days and we should be adult enough to know when to stop.  However, if parents are not feeding themselves or their children probably, then what?

Preschoolers (4 year olds) are at the same time obese and shockingly deficient in nutrients needed to stave off chronic diseases, a study of Australian children has found.  The poor nutritional intake was found in children from both rich and poor backgrounds. Nearly all the children in some age groups were eating more than the recommended intake of saturated fat. (link)

Sadly we are more concerned about our individual rights to do as we wish (and eat as much as we like) and as a consequences we are now have a growing health bill that someone needs to pay.  Should it be user pays - if your health deteriorates due to poor lifestyle choices (self inflicted), you pay the bill? This of course raises some problems, poorer people tend to eat poorer diets and therefore have worse health issues (our Indigenous community is a good example) and wouldn't be able to pay their bills, then what.  Not the sort of thing done in a humane society.

It is a tricky situation and one that countries like the USA and Australia will have to tackle before the health bill gets too large to pay. In 2009 the US government was spending approximately $147 billion on obesity, probably much higher in 2012. That is a lot of money for an issue we have caused ourselves.

I'm not bitter because I can no longer consumer these "bad foods", in fact I feel liberated as I have discovered that there is an abundances of wonderful healthy food to eat, why would I waste my time on empty useless calories (not that I am perfect all the time, far from it) when I can make so many wonderful dishes from scratch.

Even the Bible warns us against eating and drinking too much.  All things in moderation. A homemade brownie is perfectly ok in moderation (and eaten occasionally) and is far better than any equivalent bought from the supermarket.

In my home I am on a mission to cut back on sugars, increase fruit and vegetable (make it the bulk of our groceries), eat a little less meat, increase fibre and move to organic foods to reduce our intake of nasty chemicals. Not an easy task with a husband that loves his chips and lollies! But with love and dedication I just might be able to move him in the right direction!!

Do not mix with winebibbers, Or with gluttonous eaters of meat; For the drunkard and the glutton will come to poverty, And drowsiness will clothe a man with rags.
Proverbs 23:20-21