The smutty business of sellling perfume 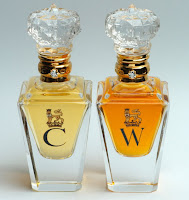 I love wearing perfume. I wear it when I am at home, when I go shopping and I wear it to work. When I was younger I bought expensive perfume and now that I am more money wise I tend to buy slightly cheaper perfume as I can't really justify spending $150 on a bottle of perfume!

I am not the only one who likes to wear perfume. It is a billion dollar industry that is only growing. In 1990, 76 new fragrance were launched worldwide, in 2011, this had increased to 1 047 launches (that is to say, new perfumes on the market) and already this year 500 have been launched adding to all the others that we currently have. Considering the economic struggles in many countries around the world, one has to wonder who is buying all these new perfumes, many are very expensive to purchase and not on the budget of most women.

The Disney-owned ABC network in the States quickly found issue with the amount of cleavage she (Madonna) was flaunting and banned the ad until the creators agreed to a re-edit. It then joined an illustrious list of celebrity perfume endorsements deemed too inappropriate for the mainstream media.

It appears that advertisers believe that to sell perfume it needs to be connected with sex -- but not the old fashion romance, but provocative sexual scenes.

This has been the situation with Lynx (male deodorants/body wash) who have been running a number of very racy (and sexist) advertisements which are aimed directly at the male teenage market.  They appear to deliberately run advertisements that they know will offend but make sure these advertisements appear on YouTube, so even if the ad is pulled from TV, it still goes viral on YouTube and they get their "message" to the audience it was intended for (free of charge).  From what I can gather companies are not fined for creating and showing offence ads, they are just asked to removed the ad - so no penalty for going beyond what is considered socially acceptable.

They have pushing the boundaries of advertising for a long time and using sex to sell perfume isn't new. Back in 1971 when Chanel No. 5 was struggling, they created a number of ads that were considered sexy (but nothing like todays versions) which result in the perfume regaining popularity and making it the number one best seller (where it still remains today). Today's ads have continued down this path but pushing the boundaries as far as possible to "grab our attention".

However when an is ad banned (which appears to be quite common these days), the perfume company gets the attention it wants and therefore free advertising via the news.  As one journalist says "you’ve got to wonder -where will they go from here?" - just what I think too.

All quotes are from the article "The highly sexual art of selling perfume", 21st May by Sarah Oaks (Daily Life). This also includes the statistics on perfumes. Please note that the article includes photos that may not be considered approximate.