Very little is known about Durrie and what has been gather has be through his diaries and account books which show his commissions, sales and exhibitions.

Durrie was born in New Haven, Connecticut in 1820. His father was an emigrant from England and his mother was a descendant of Governor William Bradford, a Mayflower pilgrim who became a leader of the Separatist settlers in Plymouth Colony.

In 1839, Durrie and his older brother John began taking painting lessons from Nathaniel Jocelyn, a renowned New Haven portraitist and Honorary Member of the National Academy of Design. Durrie studied with Jocelyn for two years. During these formative years Durrie’s account books indicate he was already taking commissions to paint portraits.

Throughout his life Durrie had a strong interest in the church and its music. He played violin and bass viol, and often sung in church choirs. His diary reveals it was not unusual for Durrie to attend church three or four times each Sunday. While painting in Bethany, Durrie attended rehearsals for the Episcopal Choir where he met Sarah A. Perkins. Durrie and Perkin married on September 14th, 1841. The couple had a son, George, in 1842, Benjamin in 1847 and Mary in 1852.

After getting married, Durrie and his wife lived briefly in Monmouth County, New Jersey, before settling in New Haven. Under the patronage of Judge James S. Lawrence, Durrie painted many portraits throughout the year of 1842. His account book shows at this time his portraits were between five to fifteen dollars each. To supplement his income, Durrie did other painting jobs such as altering portraits, varnishing, and even painting decorative motifs on window shutters.

We are in mid-Winter, so this artist is very appropriate for this time of the year!!  I just love the delicate style of his paintings and the small details in each of the winter scenes - the details on the buildings, the animals the people.  Enjoy. 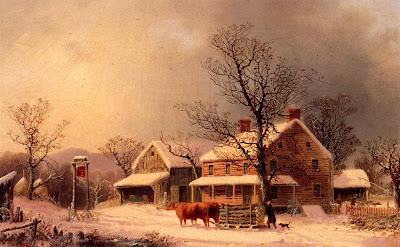 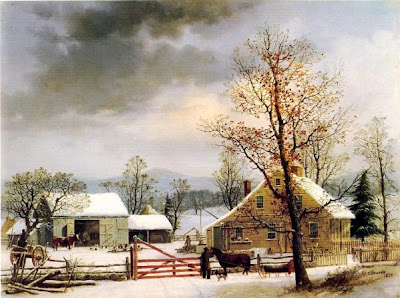 Durrie’s landscapes are characterized by pale yet bright colors and by the repeated use of certain motifs, such as an isolated farmhouse, a road running diagonally through the composition, and a hill in the distance. 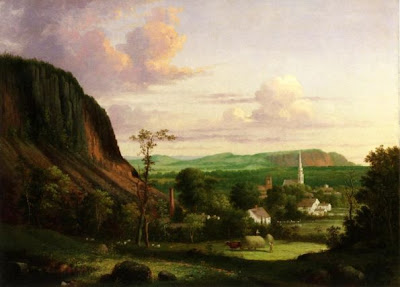 Durrie had a modest reputation during his lifetime, however after his death the Currier and Ives prints ensured Durrie’s works were kept in the pubic eye. Since the 1930s, Durrie has been increasingly recognized for his paintings following posthumous recognition in books, articles, and numerous one-man exhibitions. Most of his paintings remain in private collections however important examples can be viewed in the collections of the National Portrait Gallery, the New York Historical Society, and the Fine Arts Museum in Boston.