How we buy food: interesting facts 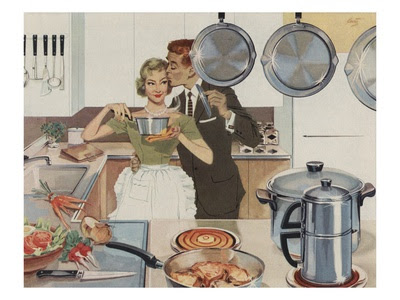 Magazine Illustration of Husband Kissing Wife in Kitchen (source)
As you know I am very interested in food. Not only do I like to eat food (don't we all), but I love home cooking! But being a statistician, I also love numbers (not quite as much as food) - but when I can combine the two, its fascinating. Here are some statistics that are all about food that I think you might find very interesting.

Australian's spend...
Of that $237 per week, most of it appears to go on restaurants and alcohol, not much on anything healthy!   If people went back to basics (more fruit and veg and less take-ways), they could probably save quite a bit each week on their household expenditure. Since we cut out buying processes foods I have noticed a reduction in the shopping bill.  Processed foods is quite expensive.  How does this match your grocery shopping?  We hardly every eat out or buy take-ways so very little goes in that area for us.
Australian's buy...
Most are heavily processed and I wonder how much we really need of the 55,000 products - I find now, since I reduced the amount of processed  foods I buy, I don't go down most of the aisles in the supermarket.
Australian's cook...

Interesting!  As I mentioned early, with a simple move away from processed foods, I am now spending less each week on food - I'm not trying to be frugal at all, it just happened. A big basket of fruit and veg costs less than a similar basket of tinned and packaged food and the latter doesn't last as long.  Even when I add some organic items, it is still coming out cheaper (I don't buy organic meat at this stage as it is very expensive).

Two of my work colleagues are also reducing the amount of canned/processed food items they buy and they have noticed the same thing as I have, so it isn't just me.

* The Australian and US dollar are at parity


Source of data: The Australian Institute of Health and Welfare "Australia's Food and Nutrition report", 2012