How times have changed


"Not soon enough. Laboratory tests over the last few years have proven that babies who start drinking soda during that early formative period have a much higher chance of gaining acceptances and 'fitting in' during those awkward pre-teen and teen years. So, do yourself a favour. Do your child a favour. Start them on a strict regimen of sodas and other sugary carbonated beverages right now, for a lifetime of guaranteed happiness. "


Soda Pop Board of America

Might explain some of the overweight issues we are having now with the older population. And now I know why I was a shy child - didn't drink enough soda.


NOTE:Just check further on this ad and discovered its is indeed a fake - I must tell my collegue who pinned it up at work.  So easy to get sucked into thinks that look real.  Need to be more careful.  My apologies. 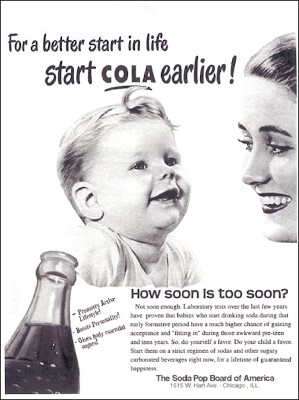 Have a lovely week.

Back to basics foods food Something funny