Illustrations from The Magic Pudding

Some of you who are familiar with Norman Lindsay may have got a little nervous when you saw that I was including his artwork today. Don't panic, only the works from his book "The Magic Pudding" have be included - why, because everything else Lindsay painted were a little x-rated, lots and lots of naked women (some quite young). However, this set of illustrations are nothing like his paintings - everyone is fully clothed.

The Magic Pudding was written and illustrated by Norman Lindsay in 1918. The story about a pudding - a magic pudding (that can walk and talk) - no matter how much one eats it, it always reforms into a whole pudding again. He is called Albert, has thin arms and legs and is a bad-tempered and ill-mannered.  Like many books, this one has some "badies", the pudding thieves who (of course) steal the pudding.  There is a court scene, a constable and bit of carry-on and a rescue and everyone is happy by the end.  I think most Australian children (older ones like me) have had this read to them when younger and had the pleasure of looking for hours at these illustrations. If you haven't read the book - here is the link to the ebook (I'm not sure if it comes with the illustrations) at Project Gutenberg.  It isn't your standard children's book by any means!

For those who have read this - what did you think?
An Australian classic?
Would you recommend it? 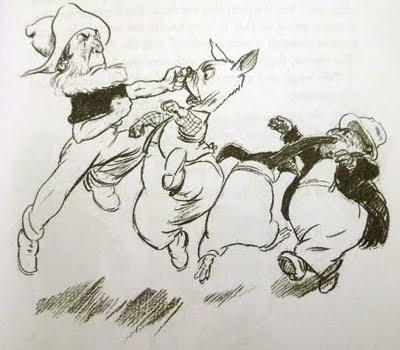 I selected an Australian author and artist today as tomorrow (the 26th of January) is Australia Day.