January 31, 2013
Too many bloggers bemoan the school system, how bad the government is, how society is slipping into quagmire, the size of the debt and the list goes on.  Some of this is true, but to a non-Christian, it comes across as a lot of unhappiness and complaining.  We need to start looking around for what is good, at people who are doing wonderful things, the kindness, the gentleness, the beauty that can be found. Being positive. Constantly finding fault in society (blaming the government for everything) is not healthy or productive and its depressing. We are told in the bible to "rejoice", but many a blog I visit is anything but rejoicing.

I have just finished reading "Call the Midwife" by Jennifer Worth.  Some of you may have seen the series on TV (which was excellent), but the book is even better and I would highly recommend it. Jennifer was a midwife in the 1950's working in the East End of London. The East End has always been the poorest part of London but during WWII it was badly damaged by German bombs due to its closeness to the docks -  it was a desperate place to live.  Whilst many a family lived in appalling conditions, often in homes that had been bombed and condemned by the government, they didn't complain about their surroundings, the overcrowding, the lack of amenities, the poverty.  In fact, many were very happy and raised their children the best they could.  They got on with living even if they were all crammed into a 2 bedroom house with no running water.

We live at a wonderful time, life is no longer tough as it once was, if you are on a low income, the government will provide assistants (those in the East End right up to the 1930s were sent to the Work House if they needed help) but we still like to complain and not be thankful. It doesn't mean we need to bury our heads in the sand, we don't live in a perfect society - but as Christians we really need to be far more positive and less complaining.

I could complain every morning as I drive to work. Being at home would be much nicer - its less stressful and I would be my own boss. But that isn't the plan God has for me. So I don't complain and I don't argue with Him, I made the very best of each day.

So instead of looking at what the government is doing wrong, start looking for things that are positive. Be thankful for what we have, it's not perfect, but its way better that many others have lived or are living.


In the East End I found grace and faith and hope hidden in the darkest corners. I found tenderness and squalor and laughter amid filth. I found a purpose and a path, and I worked with a passion for the best reason of all - I did it for love.

Jennifer Worth "Call the Midwife" 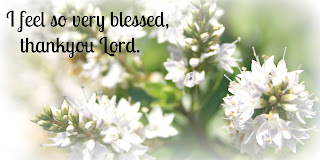