What's the issue with wearing leggings?

Last week I wrote about a young woman who wore whatever she pleased as it made her feel happy and sexy and she didn’t care if men looked at her. As far as she was concerned, it was their problem not hers. This week I found a news story where a woman decided to no longer wear leggings as she felt it was making men lust and slide.  What she didn’t expect was the level of backlash from other women who told her that she was promoting rape culture, some were saying that it’s not my problem to cover up my body because a man is always going to look.

Veronica Partridge wrote a blog post: “Why I chose to no longer wear leggings”:

“Was it possible my wearing leggings could cause a man, other than my husband, to think lustfully about my body? I asked my husband his thoughts on the matter when he got home. “I appreciated his honesty when he told me, ‘Yeah, when I walk into a place and there are women wearing yoga pants everywhere, it’s hard to not look. I try not to, but it’s not easy...’ “And at that moment, I made a personal vow to myself and to my husband. I will no longer wear thin, form-fitting yoga pants or leggings in public.”

I strongly dislike leggings and believe they are very inappropriate in public. In many instances these leggings are no different to wearing black tights and reveals a woman’s every curve. I have seen younger women wear these to work with a blouse or t-shirt which do not cover the backside in anyway and it’s a very ugly look, leaving nothing to the imagination. They are also far from suitable for a workplace, there is no way of sitting in a lady like fashion, its often a very casual look and I am certain it does create a stumbling block for some men.

I don’t believe what women wear necessarily leads some men to rape — those men who rape will find victims regardless of what a woman is wearing. I do think though what we wear does affect the average man on the street and I do believe that women have a responsibility to help men not to struggle. That doesn't mean dressing in sacks, but it does mean being aware of the length of our skirts, the tightness of our jeans and not revealing everything when wearing blouses and T's. As one comment said: "You're correct in that we can't control how people will react, but we can control what message we send out in the first place!" 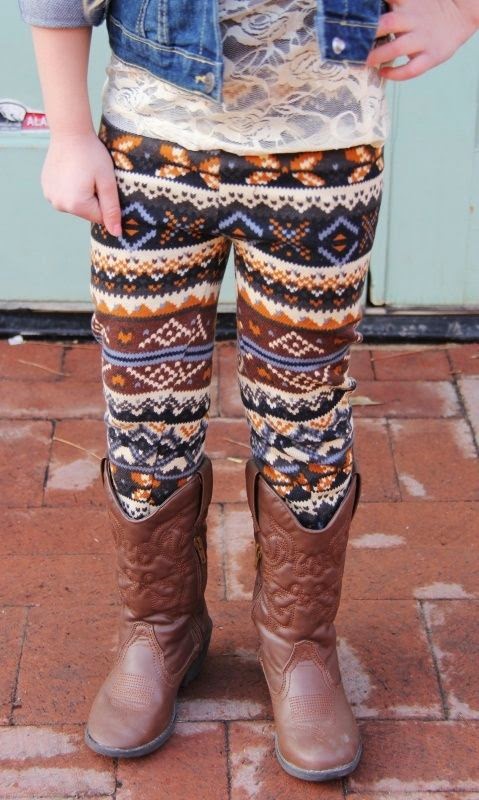 As for young girls, I also don't like seeing leggings younger girls (besides babies and toddlers) without something covering their bottoms (such as in this photo). Once again, it comes down to common sense and protecting our girls from the wandering eye of some men and for them to have an understanding of modesty at a young age and what message they are portraying to others.

However, we aren't going to change the views of many women in society - their minds are made up: "If my wranglers are viewed as sexual by someone that is THEIR problem. I refuse to censor myself and walk around in a granny sack because of someone else's warped view of modesty. Women don't deserve that burden and unnecessary guilt, no matter what they're wearing. If you can't control your eyes, that's no one else's problem but your own." (comment from Veronica's blog post)

However leggings are great under dresses and skirts in winter - they keep legs warm and cosy. They are a great around the home with a jumper/tunic or pinafore as they are very comfortable. We just need to think a little more before stepping outside.

I will end with this comment from a male perspective from debate.com:  "No. I encourage you not to wear them. As a man, leggings seem send a sexual stimuli to my brain each time I see them that tempts me to think improper thoughts. While I control my mind the best I can, it is much easier to do so when I am in the company of those who dress in a less revealing manner."

But I say to you that whoever looks at a woman to lust for her has already committed adultery with her in his heart. (Matthew 5:28)