The history of the mini skirt/dress

August 31, 2015
I am one of those curious kinds that like to know why things happened or came about!! My latest wonder was the mini skirt and it's history, perhaps because the mini-skirt and I were born in the same year and have traveled almost 50 years together!

Warning — this post contains some examples of the mini skirt/dress from the 1960s.

* Disneyland outlawed the mini-skirt and the gatekeepers would measure the distances from the woman's knee to her hemline and restricted her entrance until she ripped out the hem.

* The mini was introduced by Andre Courreges in 1965. He felt that clothes were not keeping up with modern trends and wanted to introduce something that was modern, streamlined and easy to wear.  Courreges created the A-line skirt that did not cling to the body and was worn with white boots. (source)

* Mary Quant (1960s) is considered the mother of the mini (the short skirt reportedly named after her compact car), and said in a 1995 interview with Vogue. “They celebrated youth and life and tremendous opportunity. They had a kind of ‘Look at me’ quality. They said, ‘Life is great.’” (Source: Vogue)

* Not only did the birth of the miniskirt coincide with that of the Pill, but all of that exposed skin brought attention to a woman’s sexuality. (Source: Vogue)

* Mary Quant wanted the skirt to show femininity and sensuality rather than being vulgar and tasteless.

* The 1960s was the first point in history were fashion was lead by the young. Young women wanted to be radical and different, they wanted to be empowered and rebellious and they didn't want to follow the rules that women in previous generations had followed. They wanted to set their own trends and no longer be see as quiet and submissive in society.

* It wasn't until to the mid 60's (1966) did the short skirt become more wide spread. Mary Quant was producing minis that were set 6 to 7 inches above the knee

* The introduction of the pantyhose (tights) made wearing a mini much easier. It was hard to wear a mini skirt/dress with stockings, whereas pantyhose offered protection from the elements and no unsightly glimpses of stocking tops. Stockings died in the mid 1960s as a result as young women no longer wanted to wear the suspender belt, girdle etc.... (Source)

* The mini led to a revolution in hair, shoes and accessories.

* Mini skirts became an increasingly popular in films and movies of the late 1960s. Gene Roddenberry (Star Trek movies) decided to integrate the mini skirt as part of the uniform of the female crew of the spaceship.

* ABC aired a television special called "The Mini-Skirt Rebellion in the US in 1967 and introduced the style to young Americans. 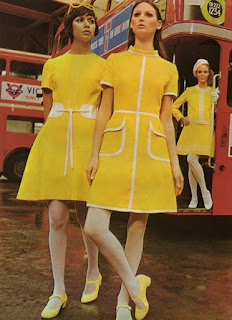 * Whilst synthetic fabrics were invented in the 1930s and 40s, it was in the 1960s were they mass produced and were considered ideal for the latest fashion of the mini skirt and baby doll dress.

* As fashions moved into the 1970s, the bohemian style of maxi dress took over and as the fight for women's rights grew, the mini wasn't seen as counterproductive (as in the wearing of alluring garments).

* The modern mini is known as the "micro-mini" and you guess why, it is considerably shorter than the minis of the 1960s. Modern minis tend to be more figure-hugging and if loose, more likely to give others a view of their backsides.

* The mini still remains controversial being blamed for encouraging men to rape women and this has led to many a protest by women stating that men need to control their behaviour rather than women changing their clothing.

I hope you enjoyed my coverage (or perhaps lack of, consider mini skirts today cover nothing) on the mini. As to the question of modesty and mini — well, I think the answer is clear. Minis don't cover anything (more so today than in the 1960s)  and therefore couldn't be classed as modest in any way.  And whilst I believe that men need to control their lust, we as women do need to make sure we don't reveal all and allow men to trip.