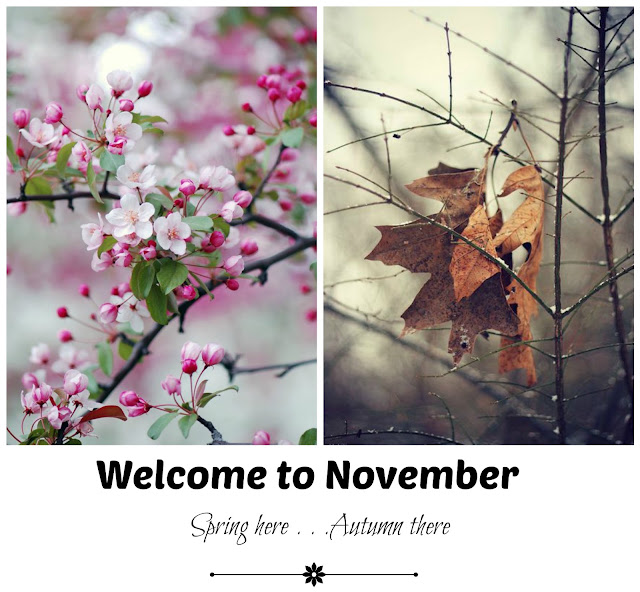 November has arrived, the second to last month of the 2015. I am going to say what I always say at this time of the year . . . where has the year gone.

I haven't done half of what I planned to do, I haven't saved as much money as my spreadsheet said I would, I haven't lost as much weight as I expected, I haven't been as organised as I wanted to be but I but I have probably read far more books than plans (!!) — o'dear, not a lot I can do about it.   Next year perhaps!

So what are my plans for November
(I can not guarantee I will get any thing on my list done, but I always try my best):

1. Start Christmas shopping. It would be great to have most of it done before December and as I have some ideas of what I want to buy it shouldn't difficult. I do have to make some orders from overseas, so they should be done as soon as possible to make sure they arrive on time.

2. Start a quilt that I am making for a birthday next year. I need plenty of time as quilts take me ages to make (I get side-tracked to often).

3. Organise birthday cards for November —already sent my brothers, which is good as today is his birthday!!

4. Start reading Alice in Wonderland for bookclub - looking forward to this as I haven't read Alice since I was a teen.

5. Keep loosing weight and exercising daily — I have been doing this all October and been a little disappointed in not seeing results fast enough!!

6. Tidy up my jumpers from winter and wash any that need washing before storing them away for another season.

What are your plans for November?

As you know, I love interesting facts about stuff — so here is some things that you might not have known about November!! Enjoy.

The birthstone for November is the topaz.

The birth flower for November is the chrysanthemum.


The Anglo-Saxons called November ‘Blotmonath’ after the blood of slaughtered cattle. In Finland they call November 'marraskuu' which translates as month of the dead.In Welsh it is "Tachwedd" also meaning slaughter of the animals.

In the original Roman calendar, November was the ninth month of the year. It got its name from the Latin word "novem" which means nine. However, it became the eleventh month when the Romans added in January and February to the start of the year.

November is the only month used to represent a letter in the phonetic alphabet.

“November is the most disagreeable month in the whole year,” according to Louisa M Alcott in Little Women, which is  interesting as Lousia was born in November (1832).

There is no mention of the month of November in any of Shakespeare’s plays or sonnets.

November is Peanut Butter Lovers Month and National Pomegranate month in the USA.

Guy Fawkes day in Britain. The day was declared a holiday by decree of Parliament after Parliament was saved from being blown up by Guy Fawkes in the Gunpowder Plot of 1605.

Thanksgiving Day - fourth Thursday of November for those in the USA