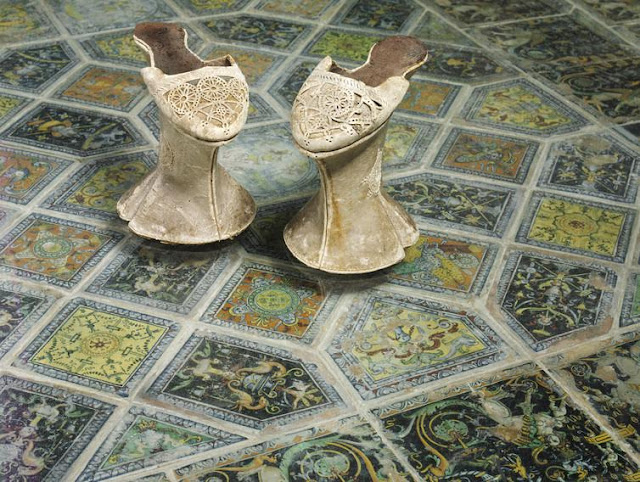 Renaissance Italy provides one of the most striking instances of the shoe’s extreme history. Venetian women of status popularised the wearing of a style called the chopine. These platform shoes were often crafted from wood or cork. And 15th-century Venetian gentlemen were very keen for their wives to wear these extremely high shoes, according to Elizabeth Semmelhack, senior curator at The Bata Shoe Museum. This was because of the way it hindered their mobility – and therefore, the idea goes, they would be less likely to run off with other men. Indeed, very often these women would have to be accompanied by attendants to ensure that they didn’t topple over. Chopines would be an average of around five and a half inches but their height was rumoured to have reached up to 20 inches. As elevations became more extreme, Venetian sumptuary laws were even brought in to address the ridiculous nature of these shoes. In 1430 the Venetian Major Council forbade the wearing of chopines that were more than three and a half inches in height. Chopines were by this point condemned as an insult to God, perilous to the wearer’s souls as well as their bodies. (source)

* In the early 1300s, Britain established the first means to measure shoe size. King Edward II declared barleycorn as the basis for shoe measurement. He ruled that the length of three barleycorns were equivalent to one inch, making this the standard for sizing.

* For centuries, heels signified a high social standing rather than gender. It was also crucial for men riding horses to have a heel on their boot in order to stay in their stirrups.

* According to a recent study, the average American woman has at least 19 pairs of shoes in their closet.

* Due to the trade close Italy experienced in the 1940s, steel was no longer available, so designer Salvatore Ferragamo experimented with new materials thus creating the wedge shoe.

* Sneaking around and sneakers go hand in hand. According to The New York Times, in the late 1800s, people started using the word sneakers because the rubber sole allowed you to “sneak” around without making a sound.

* In Europe in the sixteenth and seventeenth centuries heels on shoes were always coloured red.

* Shoes all over the world were identical until the nineteenth century, when left- and right-footed shoes were first made in Philadelphia.

* The first lady’s boot was designed for Queen Victoria in 1840.

Today is a fun revisit of shoes of the past - I have to say I would be thrilled to see shoes from the 1920s to the 1950s back in the stores, some of those shoes are just beautiful!!  They have so much more character, colour and femininity than modern shoe.

What sort of shoes do you like to wear?