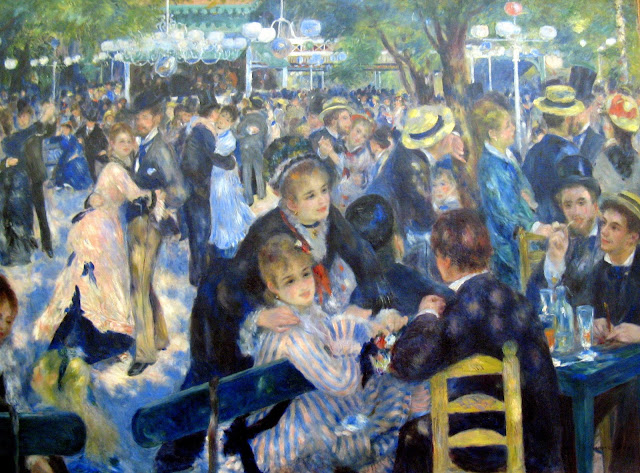 Painted in the 1870s and shown at the Impressionist exhibition in 1877.

Though some of his friends appear in the picture, Renoir's main aim was to convey the vivacious and joyful atmosphere of this popular dance garden on the Butte Montmartre. The study of the moving crowd, bathed in natural and artificial light, is handled using vibrant, brightly coloured brushstrokes. The somewhat blurred impression of the scene prompted negative reactions from contemporary critics.

The Moulin de la Galette is a mill located at the top of the hill of Montmartre and in the 1870s it served as the main centre of Sunday leisure for the local young people. Renoir painted this scene of dancing en plein air, directly in the open, fascinated by the truly folk atmosphere of the amusements.

The artist’s younger brother, Edmond Renoir, gave this description of his work on the Bal in 1879: “He took up residence there for half a year, became acquainted with the little world of the place and its particular life that no models would have conveyed and, having got into the atmosphere of that popular little restaurant, he depicted with amazing enthusiasm the unrestrained hurly-burly that prevailed there.”

The choice of subject was to an enormous degree predetermined by the circumstances of Renoir’s life in Montmartre. At that time the artist was mixing closely with a group of young painters who were regulars at the Café de la Nouvelle Athènes. They all happily agreed to pose for Renoir’s painting, were involved in recruiting models and chased after the local girls. For them it was a performance, a sort of “happening” and all that remained for Renoir to do was to catch their poses on the fly.

It is oil on canvas painting measuring 131 x 175 cm. Renoir also painted a smaller version with the same title and this measured 78 x 114 cm.  From 1879 to 1894 the Bal du moulin de la Galette was the property of French painter Gustave Caillebotte. When he died, it became a property of the state in lieu of death duties. The smaller version is in the hands of a private collector. For many years it belonged to John Hay Whitney and after his death his widow sold the painting at $78 million to Ryoei Saito.  When Saito announced, that on his death the Bal du moulin de la Galette and Portrait of Dr. Gachet, van Gogh painting he owned, would be cremated along with him, it caused international outrage. Fortunately, Saito’s company had severe financial difficulties. The bank which held it as collateral sold it to a private collector. 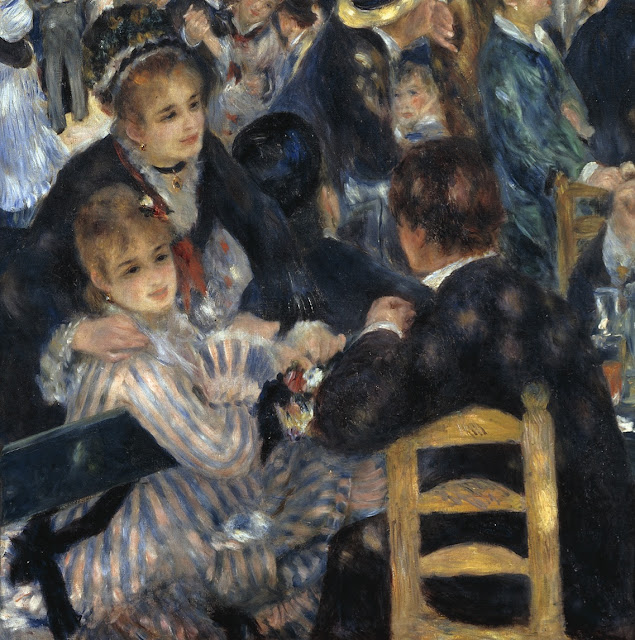 Information contained in this blog post has been sourced from the following: