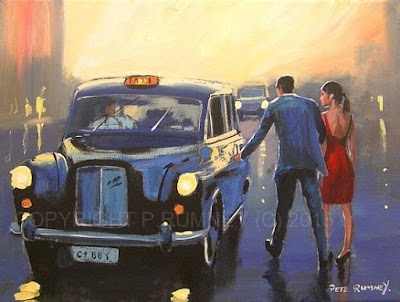 . . . . It could be any suburb near the city. Bird droppings smear footpaths already stained with spilt food and drink and spit. Discarded papers and cigarette butts swirl in the gutter. Amid all this, a frail, elderly woman, well dressed with a big floppy hat, edges a shopping trolley loaded with groceries painfully slowly along the path, battling the wind and a body sapped of strength.  It's awful to watch. A couple of high school kids accidentally bump the trolley and snigger. A trade (tradesman) leaning against a wall gnawing on a kebab catches my eye and looks away. I'm walking two dogs who are straining at the leash, intoxicated with the smells on the ground and in the air. No one is willing to help the woman. And so for the next 20 minutes she grabs my offered arm and we inch our way to a cab rank two intersections away, wrestling with the trolley, the dogs and dozens of passers-by who couldn't give a toss. At one stage a taxi rolls by. I plead with the driver, who shakes his head and moves on. Finally, I find her a cab and send her on her way home. She's well into her 80s, a widow. As I close the taxi door she reaches out and kisses my hand to thank me. "People don't help any more," she says in broken English.

Friends and family from interstate have noticed the changes in recent years; the increasingly upturned middle finger in traffic, the lack of acknowledgment from other drivers if you let them pull in front of you. The young and heavily pregnant woman on the packed bus no one stands for. The man with the broken leg on a crowded train, forced to lean on his crutches as the crowd in the swaying carriage looks everywhere else. ~ Garry Linnell (12th November, 2016)

It is almost Christmas, the time of giving and taking care of others — Christmas is not about what gifts you might receive or spending lots of money or indulging in food — I know thats the focus we are told it should be, but it isn't. This time of the year should be about giving, being kind, generous, caring and reaching out to those in need. Ok, that is what it should be 365 days of year and Christmas shouldn't be any different.

Let each of you look out not only for his own interests, but also for the interests of others. (Philippians 2:4)

So, as we go into the last few weeks of 2016, the maddest time of the year — reach out to others, give a hug, pray for those in need, lend a hand, make a casserole for a family who might be struggling, offer to babysit for a mother looking weary, donate to charity, help someone in the carpark who is struggling with their trolley—help an elderly lady cross the road. There are so many ways we can all reach out and make a difference and really, isn't that what Christmas is about.

On average, Americans  spend $830 US at Christmas, Australians spend $300-400US. Just imagine if we halved our spending a gave a little charity. Here are 10 ideas to help others at Christmas—even those who don't celebrate Christmas can still get involved in these activities.


Thou shalt love thy neighbour as thyself.
There is none other commandment greater than these. (Mark 12:31)