Women of the Bible: SARAH 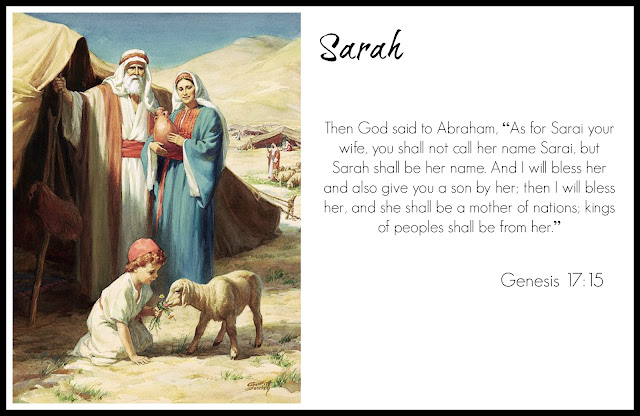 This year I am writing a series on the women of the bible — we can learn so much from each of these women, many ordinary like us making the same mistakes that we make.  The first post is all about Sarah.

Sarah (originally named Sarai) was one of several women in the Bible who were unable to have children when she expected to. That proved doubly distressing for her because God had promised her husband Abraham that he would be the father of the Jewish nation, with descendants more numerous than the stars in the sky.

After waiting many years of no baby, Sarah convinced Abraham to sleep with her handmaiden, Hagar, to produce an heir.  Like many of us today, Sarah struggled to trust God and was sceptical that He would fulfill His promise. Instead she plunged ahead with her own solutions thinking her way would work best. It never does. Sound familiar, I think we have all done this from time to time (or far more frequently) and we always end in a muddle and mess. 😊

A child was conceived by Hagar and named Ishmael. But God had not forgotten his promise (He never does and we shouldn't ever doubt him). Three heavenly beings, disguised as travelers, appeared to Abraham. God repeated his promise to Abraham that his wife would bear a son. Even though Sarah was very old, she did conceive and deliver a son. They named him Isaac.

By faith Sarah herself also received strength to conceive seed, and she bore a child when she was past the age, because she judged Him faithful who had promised. (Hebrews 11:11)

Sarah had her faults (not trusting the Lord was a biggie), but she was obedient to her husband Abraham, calling him “lord” which demonstrated her respect and honour (we too need to treat our husbands with respect and honour). Abraham wasn't perfect either and did things he wouldn't have been proud of such as passing Sarah off as his sister—landing her in Pharaoh's harem. We cannot deceive and lie to God as he always knows.

Now Abraham said of Sarah his wife, “She is my sister.” And Abimelech king of Gerar sent and took Sarah. But God came to Abimelech in a dream by night, and said to him, “Indeed you are a dead man because of the woman whom you have taken, for she is a man’s wife.” (Genesis 20:2-3)

Sarah waited 90 years to have a baby. Certainly she had given up hope of ever seeing her dream of motherhood fulfilled and I think many women are relate to how Sarah felt. Sarah was looking at God's promise from her limited, human perspective and at times faulted in her faith as we do. But the Lord used her life to unfold an extraordinary plan, proving that he is never limited by what usually happens. Sometimes we feel like God has placed our lives in a permanent holding pattern — know that feeling? Rather than taking matters into our own hands, we can let Sarah's story remind us that a time of waiting may be God's precise plan for us.  Our prayers may not be answered today or tomorrow, we may need to wait our entire lives to receive an answer, God does answer all our prayers just in his time line and not ours.

Sarah lived one hundred and twenty-seven years; these were the years of the life of Sarah. So Sarah died in Kirjath Arba (that is, Hebron) in the land of Canaan, and Abraham came to mourn for Sarah and to weep for her. (Genesis 23:1-2)