Past and Present series by Augustus Leopold Egg


Many Victorian paintings tell a story, but these three by Augustus Leopold Egg tell a very sad and tragic story that happened far too often to women in the 1800s. If you ever wanted to understand why women rose up and took charge of their situation and started the feminist movement, these paintings explain it perfectly. Women were treated like second-class citizens. They had no rights, they could loose everything, including their children and home on the whim of their husbands. The wife of Charles Dickson, English author, kicked his wife out of his home and forbad his children from seeing her, because he had taken on a mistress and didn't love her anymore. She was powerless to do a thing.

These three paintings are about the discovery of the woman's infidelity and its consequences. In Victorian England a man could safely take a mistress without fear of recrimination, but for a woman to be unfaithful was an unforgivable crime. As Caroline Norton, an early feminist, wrote, 'the faults of women are visited as sins, the sins of men are not even visited as faults' (quote in Lambourne, p.374).

The three paintings reflected fears that public morality and family life were imperilled by the recent Matrimonial Causes Act 1857, which reformed the law of divorce by moving jurisdiction from the ecclesiastical courts to the civil court, and made divorce a realistic prospect for the middle classes.

In the first scene the wife lies prostrate at her husband's feet, while he sits grimly at the table and their children play cards in the background. The husband is holding a letter, evidence of his wife's adultery, and simultaneously crushes a miniature of her lover under his foot. The setting is an ordinary middle-class drawing room, but closer observation reveals that the room is full of symbols. The house of cards is collapsing, signifying the breakdown of the couple's marriage. The cards are supported by a novel by Balzac - a specialist in the theme of adultery. An apple has been cut in two, the one half (representing the wife) has fallen to the floor, the other (representing the husband) has been stabbed to the core. As a parallel, the two pictures on the wall depict the expulsion of Adam and Eve from the Garden of Eden (labelled The Fall); and a shipwreck by Clarkson Stanfield (labelled Abandoned). The couple's individual portraits hang beneath the appropriate image.

In the background of the picture the mirror reflects an open door, denoting the woman's impending departure from the home. The position of her arms and the bracelets round her wrists give the impression that she is shackled. The packed bag and umbrella by the door may underline her imminent departure, or could have been cast down by the husband when he arrived home.

Note that the one of the young girls is watching and learning about gender roles in society. 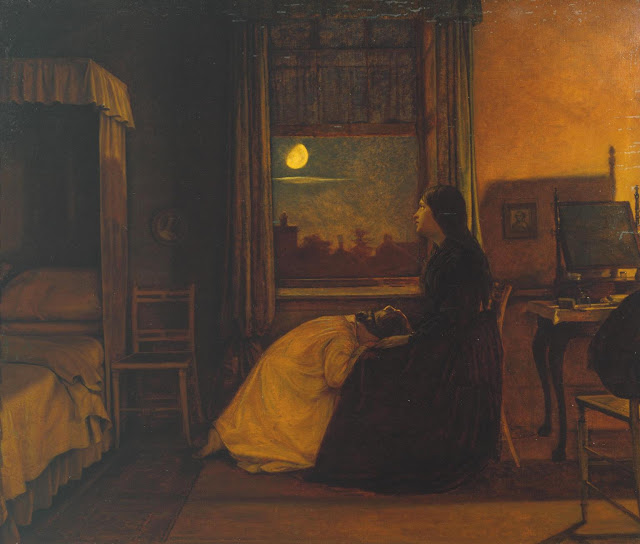 The second scene is a dimly-lit garret, five years later. The room is sparsely furnished and the few decorations include two portraits of the absent mother and father. The father has recently died and the mother has been driven out of her home, a fallen woman. The two orphaned girls comfort each other, the elder gazing sadly over the rooftops towards the moon. 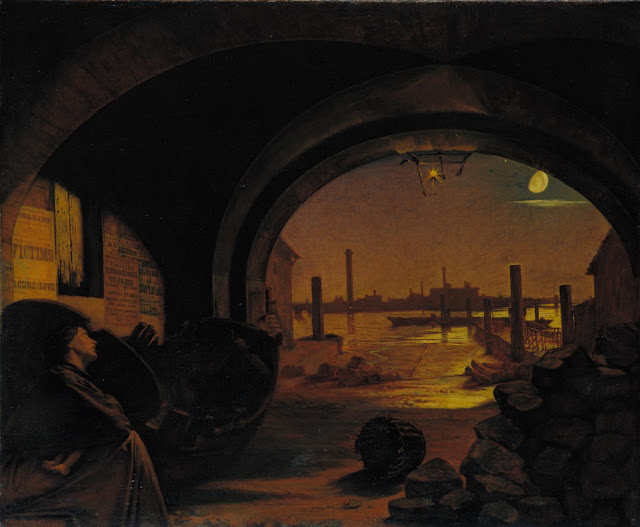 The third painting is also a night scene. The details of the cloud and moon show it is the same evening as depicted in the second painting. The fallen wife is resting in the detritus-strewn shadows beneath the Adelphi Arches, by the River Thames. She clutches a bundle of rags from which protrude the emaciated legs of an infant, perhaps the fruit of her affair, either asleep or dead. Posters on the wall ironically advertise two contemporary plays, "Victims" by Tom Taylor and "The Cure for Love" by Tom Parry, both tales of unhappy marriages, and also "Pleasure excursions to Paris", perhaps a reference to the novel by Balzac in the first picture. She looks up from her place in the gutter to the moon and stars above.

Egg wasn't the only artist to painting these tragic imagines of women. The painting below "Found Drowned" by Watts also depicts a scene of a "fallen woman" who has thrown herself of the bridge in despair to escape the shame of her affair. Of course, the man who she had the affair with will not suffer any ill-repute for his behaviour.  Simply dressed, perhaps a servant, her arms and body form the shape of a cross. She holds a locket and chain in one hand, indicating her attachment to her lover, with a single star visible as a sign of hope in the sky above.

Other information is sourced from the Tate Britain.